No time for a rest – newly explored sections at Diós-patak 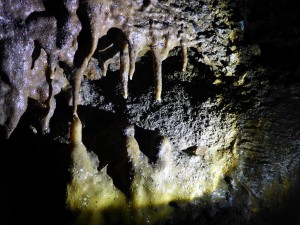 Dripstones in the fossile passageway, which opens from the “Féreg-járat”

After taking part the Professionals’ days at Jósvafő, on the way back we decided to visit the sinkhole-cave of Dióspatak, -which could be found in Bükk mountains- because last time, when only a little work was needed to get deeper in the mountain – as behind a tight section the cave seemed to continue- , we were in a hurry, so the cave was left there with the possibility of an easy pass-through.

Although, after some splitting there, only a small room welcomed us, but at two different other points we noticed exciting – but that moment, not passable- sections. Luckily, we were able to ream both of them, and found about 20-20m yet undiscovered parts of the cave. The weather was not ideal for sensing the draft, but we noticed, that it is going into the newly discovered, upper section, which leaded towards the surface, and at its end, scree closed our way, and roots of plants appeared. The bad news is, that we wouldn’t be able to use draft as our leader for the future explorations. 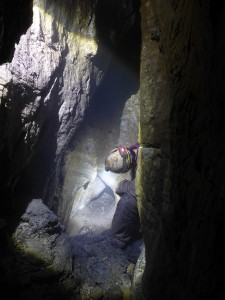 The new deep endpoint, where water flows away

The other way, which was leading downwards, was more interesting, because water flows in there (even now, when the main passageway of the cave behind the entrance was totally dry!) , and the deep endpoint of this is a tighter siphon, which is filled with gravel, so it could be ideal for some splitting ther. It could be… The problem is the water flowing in, which would flow in if we dig out anything, hardening the job. So, we will wait for more ideal conditions whith this, and anyway, we have other places to research…

We haven’t done the mapping of the cave, but the old part, and the Féreg-járat is heading at least 90 degrees, or possibly even 180 away from each other, so the new section could be an alternative way for the water to flow away, so it would not lead into a part of the “old” section. Considering the sinkhole of Pénz-patak in the neighbourhood, the potential depth of this cave would be about 150m. Though, the new, 40 metres is not such a big discovery, but if we notice, that this year the total days spent in caves was 110 days, and if we could discover 40m every time, then at a year, it would be 4400m, which is not bad.

And finally, a summary of the latest discoveries since summer, for anybody, who couldn’t follow it step-by-step:

Middle of august, 2015: with hard work, a new, 60m length part is discovered in a non-carstic cave in the Visegrád-mountains, which became 33m deep with this section. Also, tiles, and a chisel were found, which are roughly from the 1st-2nd century.

End of august, 2015: we re-discovered the cave of Diós-patak, after 20 years being crashed in, and after that, on the day of the official visitation, a new section has been opened.

Beginning of september: 2015: unbeliveable luck, but we’ve found a hole in Pilis, and after putting two rocks away, an undiscovered cave’s entrance opened in front of our eyes. The cave were given the name “Kőszakállú”.

Beginning of november, 2015: Finally getting into the pisolite and crystal-covered Mindenszentek room, and some days later the next part: the Ikrás-akna (Spawny-pit) and with that the cave reaches 35m of depth.

Middle of november, 2015: In the sinkhole-cave of Dióspatak, only in one day, at three different parts of the cave, new sections were revealed, we found, where the draft is coming from, and also a new local deep endpoint was revealed, which seems ideal, and which is one of the currently 3 parts, where the water is flowing away.