The „cave-days” –program will be held between 24th and 26th of June, 2016. Although they did not ask us to help, we really will do it. During the programs, we are planning to organise some hikes in caves Szent Özséb, Kiss Péter, and Vacska. (Upate: we did not succeed to get the permission for cave Vacska)

Polygon-sketch of the Csévi-szirtek. Parts within the black line were known in 1991. At the time, when we joined, in 2004 parts within the red line existed. Out of the red circle is the result of the cooperation. The drawing shows the discoveries until 2013. The polygon-map was created by Ariadne team and Szent Özséb team.

The Cave-days is a speleological meeting, which is kept in the country’s different areas every time, sometimes organized by the MKBT alone, and sometimes cooperating with other speleological teams.

Then what is the problem? Let us explain.

In 2004, the only discovered caves of the Csévi-szirtek were the tight, and dirty Legény-Leány cave (3.5Km that time) and about 1km other caves, when after discovering the Szent Özséb cave we met with the Ariadne team. After this meeting a long cooperation started to explore the caves of Csévi-szirtek. We made it so far together, that passages through separate caves became explored. Just to imagine how hard did we work, between 2008 and 2011 i had spent 300 days underground. Both teams were really important in this cooperation, and without that cave Vacska would have been still 13m long instead of the current length which is more than 5.8km… The total length of the caves in the Csévi-szirtek grew from 5Km to 15Km in 5 years.

“We decided to ask for permissions and the Ariadne and Szent Özséb team will research the cave together.” – Richárd Kovács, chairman of Ariadne team

Nevertheless, after that, the Ariadne group banned us out of all the caves of Csévi-szirtek. And though there are still there discoveries, but in the last 3 years it is not even that much in total, like the discoveries only in 2009, at the time of the cooperation. 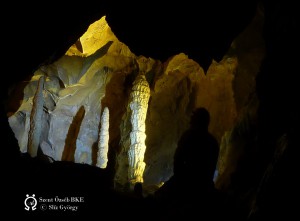 After cutting our way through 16m unpassable section “Rózsát-terem” was revealed.

So, we tried to organize some hikes, especially into cave Vacska, maybe if they had enabled us, then they must have been realized: the caves in the Csévi-szirtek will not disappear just because our team gets into them, and trying to forget all the previous cooperations is really a bad idea, because the cave is not like a chocolate. If 2 teams eat a chocolate together, it will be less… But a cave, only gets bigger if there is more people to work on new discoveries.