Formal visitation at Diós-patak, getting into another part, but this time, a yet undiscovered

It seems that luckily every two weeks there’s a discovery underground by us. If not so significant, as the last time, but it’s there; the new part of the cave has about 25 metres lenght of polygons. It’s rather tight, so we gave it a name “Féreg-járat” (“Worm-hole”) after the movemets had to be done to get in. But the more exciting is, that it seems going downwards, wich can mean, that it possibly passes round the historical end of the cave, wich also goes down, but what is simply too tight to get through it.

Sunday, Gergely Ferenczy, (a professional from BNPI) took for a formal visitation. This time were also present Csaszi (Ferenc Csepreghy, who took important part in the early discoveries of the cave, decades earlier), Miklós Dolgos, our research manager, (who held a hiking-manager course at that time), some, who took part in that course, and Ákos, who joined us this summer, and also helped at the re-exploration of the cave. 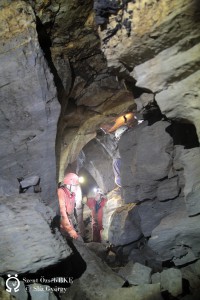 Tight passageway in the re-discovered part

As the formal part, we took some photoes, then decided to have a look at the end-point which -interestingly- also headed downwards, and where the draft came from at last time. Now Csaszi has gone first, and said, that he sees a new part, and the entrance can be cleared only by moving some stones. “It’s impossible”-i thought. But surely, we only had to move two bigger stones (about 100Kg each) to make our way further in the mountain. The way was tight but passable, and headed down, and yes, the draft sensibly came from there.
At every corner it seemd closing, but continued for 25 meters. There we arrived to a waist, which couldn’t be passed. Luckily, we hadn’t brought our tools to make our way through, because in that case, possibly the hiking-manager course -held in the neighbour cave- had been cancelled… So, finally i observed another side-hole wich headed up, and ended in a small room, with the top closed. It is clear that water usually flows in there.
Whith this new, about 25 extra metres, the polygon-lenght of the cave surely passes 100m.
I think it’s going be even more soon. Who knows?… 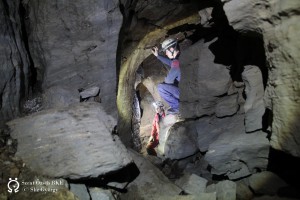 The same in landscape mode. Unfortunately, we haven’t taken any photoes in the brand new part. If we manage to get the pictures taken there, we will refresh the article.