Unbeliveable, but true. Only some days past the unwaited discovery in Diós-pataki cave, another came, as a small, but yet unknown cave.

Last week Dóra Darics saw a small hole on the surface. We threw in a stone, and listened, when it’s gonna stop. Surprisingly, it continued its way down for 4-5 seconds. (Youtube video here) 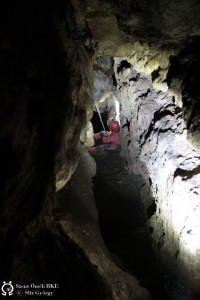 We’ve got into a wider fissure

As at our first visitation, the temperature on the surface was almost equal to the cave’s, we couldn’t expect draft. So as the weather became warmer, we returned, to check for some possible wind out of the hole. That time we weren’t in a hurry, so next step was to find out what’s inside, so tried to push the camera in and take some photoes. These pictures showed us, that the not far the hole is wide enough to get in. So after pulling out some stones around the entrance, we finally got in, to discover the unknown…