A new crystal-cave in Pilis

Update: we got through the endpoint into the next section. (click here for the full article)

Our discovery-series are being continued since last summer. Now we’ve found a crystal-cave. (gallery is at the end of the article)

Click on the picture for larger view, full gallery on the bottom

Because the pit’s bottom holed at nov. 1, as the result of our hard work (but we couldn’t get down that time, because the entrance was too unstable), a smaller discovery was expected, but what we’ve found, was beyond our imaginations…

After a tighter, sloping section, we got into a big room (roughly 10-15m long, 4-6m wide, 2-3m high, but at its middle, with a chimney it reaches about 7m). At the upper half, it could be clearly seen, that the walls’ surface was cracky, so probably it is a newer part, which was created when a lower passageway crashed in. The lower parts of the walls were undamaged, with lots of pisolite on them. On a bigger (some square metres) part the wall were covered by gypsum crystals. The limestone layer has been dissolved from behind the wall, so it could be illuminated through. We couldn’t belive to our eyes. With some pauses, after one year of hard work, we finally got the result, and even more… The room were given the name Mindenszentek-terem (All saints’ room), and Holtak Kapuja (gates of the dead) to the passageway leading there, because we saw it first time one day before day of the dead (a fest at november 2). 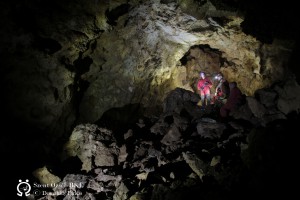 Still-life in the new section

At the end of the room, which was formed by thermal water, the passageway continues as a tight section, draft can be felt there, (of course, because air has to move for pisolites to be formed) and the stone threw in continues its way , then after falling about 5-10m, an echoing tappig can be heard.

The article about the endpoint will be refreshed within days probably.

The location of the cave is kept in secret for now, in favor of protecting the crystal-formations from being damaged, and we ask all of our colleagues who even know, where it is, please do not write it anywhere on the internet.

Anyone who is interested in the details, could come to the MKBT Szakmai Napok (professionals’ days) held in Jósvafő, at the 15th of november, 2015, where the conference begins with our presentation.
An overview of our new discoveries in the past months:

Middle of august, 2015: with hard work, a new, 60m length part is discovered in a non-carstic cave in the Visegrád-mountains, which became 33m deep with this section. Also, tiles, and a chisel were found, which are roughly from the 1st-2nd century.

End of august, 2015: we re-discovered the cave of Diós-patak, after 20 years being crashed in, and after that, on the day of the official visitation, a new section has been opened.

Beginning of september, 2015: unbeliveable luck, but we’ve found a hole in Pilis, and after putting two rocks away, an undiscovered cave’s entrance opened in front of our eyes. The cave were given the name “Kőszakállú”.

Beginning of november, 2015: Finally getting into the pisolite and crystal-covered Mindenszentek room.