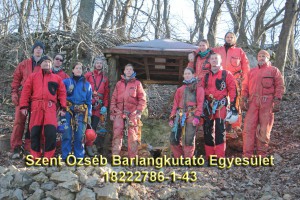 According to the informing of NAV this year, a total of 63.262ft were offered to our association (Szent Özséb Barlangkutató Egyesület) by taxpayers. We would like to say a big thank you for everyone, who helped us by offering 1% from taxes, or suggesting others to do that.

This is better than the previous year’s result, exactly 31,7% more. It is really good, but could be even more; we didn’t knew in the past that if we are entitled to get 1%’s from taxes, so we didnt do any campaigning, only our familiars knew about this option.

Anyone who is interested about offers got by civilian organisations, can read more on NAV’s website: http://www.nav.gov.hu/nav/szja1_1/civil_kedvezmenyezettek

We are a civilian organisation, which consists of simple citizens (mainly cavers), and which was estabilished without external support. Our goal is exploring caves (mainly finding new ones) and building the infrastructure needed for this (courses, dissemination of knowledge).