Inside of the Sinkhole of Pilisszentkereszt

Inside of the Szurdok-valley Sinkhole No.2.

Thank for the wet and rainy weather we had a chance to document the real face of Szurdok-valley Sinkhole No. 2. (you can find the video’s link at the bottom of the text) 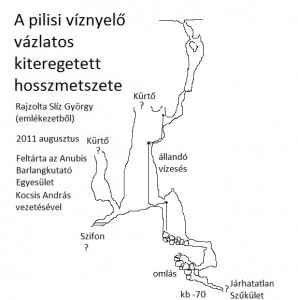 In summer of 2011 The Anubis Cave Research Group, leaded by András Kocsis, explored the sinkhole. It’s located in the middle of the Creek Dera, nearby Pilisszentkereszt. They were not the only surprised ones, but the caver’s community too, because András and his collegues found a 70 metres deep, vast pit. They explored it after they tried to deflect the creek and lift  up a stone from the  watercourse.The Valley’s reservoir area is approximately 12 squarekilometer.It results a bigger river at rainy weather, which makes almost impossible the cave visiting, but now we tried it!

It was no easy  to get through the entrance beacause one of the caver collegues tried to make a video how the sinkhole sinking the water and trying to make it more spectacular,  he deflect the creek into the sinkhole last year.As a result of this, stones laying in clay were washed into the entrance completely closed it. Since that nobody visited the Cave.So firstly we had to dig out and lift up these stones.The biggest one was  1,5 hundredweight.The entrance was so narrow so you could only dig out these ones if you crawl down upward your head.In this position you get some water flowing down on your back to your face, your nose….etc.After one hour struggle the entrance was free and we could descend into the awfully rumbling waterfall. 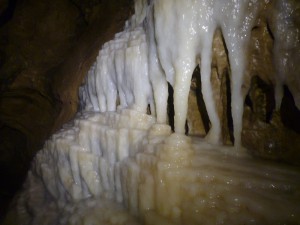 After a short hezitate I started to descend and I was aware of the fact I can see and hear nothing because of the rumbling water.  The rigging was made at dry weather so now we found the anchors in the middle of the waterfalls.I don’t want to comply because we were waiting for this weather for a real documentation.At the bottom of the 18 meters deep pit was huge wind-storm because of the hotter waterfall which relatively warmed up the walls and became warmer than the parallel pits. This difference caused big draught.

After the Great Pit there was a smaller pit without waterfall.At it’s bottom we could see the water washed clean the walls to 50 centimeters high. Hoping we will avoid this huge amout of water started to squeze ourseles through a narrow crevice, of course without our harness.

Only one collegue, the slimest one, could get through and made a few short cut about the beautiful dripstonefall.

It was a good news for us that the water could run away  in free ways, so may we can continue the exploration by digging and graving, at dry weather of course.

At climbing back it was a real adventure and challenge to get back to the top of the Great Pit.You had to climb up in the middle of the massive waterfall.You had to fight for your breath, against the splashing water.We tried to flex down our head but breathtaking still wasn’t easy. Getting through the hangers in the water was memorable experience for us.We were 3, so I could pull away the first collegue’s rope from the water.

Although we had waterproof lamps (chinese ones) they had connection porblems after a while so the last climbing collegue’s lamp was flashing continuosly. Fortunately the lamps made by Mátyás Borvendég and György Slíz were completely waterproof.

At the end, we were too tired to filming the squeezing at the entrance, so we went back on the next day, but the water output was already less.

The link of the video https://www.youtube.com/watch?v=e8XmjVsL7FI#