How we went further spontaneously in Sinkhole Útmenti

To connect the unpleasent one with the other, we practiced the rigging and in addition I showed to Fizikus some small caves close to Létrás-tető. As a result of our extensive search and climb we found 50 metres long new part, which are probably the most spectacular parts in the Cave. 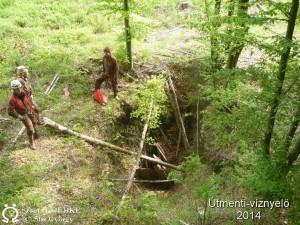 We took part six: Gergő Slezsák, Ági, Zsombor, me, Fizikus and Dóri. After  an extensive climbing in Cave Cubákos we  visited Cave Útmenti. Every caver passing away nearby this cave but very few have visited it, and fewer ones were seeking for new parts. The Cave has one characteristic, oblique crevice, at it’s bottom a syphon filled up totally with clay. It wasn’t a good endpoint but we know cave has not only syphon, it has many side passages too.
We examined all of these sides. One of them the so called „Lap-passage” was interesting because after we visited it, we easily find a narrow crevice. In it we could easily crawl some meter, and in it’s endpoint were  very few interleaved stones. I could dislodged them and the passage flexed upward. After it we found a ruin covered with dripsotnes and we could see a larger space above it.
Plus 15 metres, so this was a useful day!
Meanwhile Me and Ági tried to pass trough, Gergő, Zsombor and Dóri started to climb back to the surface. Fizikus was waiting for us. 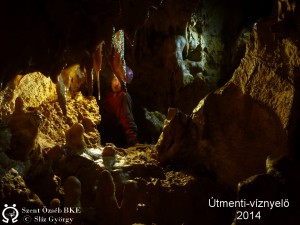 Before I came back I remembered an additional crevice started right above the stricture.I found in this horizontal narrow crevice some interleaved  white stones. Behind them I felt the calling draught!
I managed to move away some bigger stone and squeeze myself through found a bigger space, a bellshaped hall covered dripstones, heliktites and pisolites.
From the hall we saw new passages, crevices but we run out our time.Next time!
We still had to squeeze ourselves through two stricture until we reached the entrance again.
At the entrance hall we found Gergő who didn’t climbed out.We asked him, why?He said – It’s raining outside.
He had right,  a dirrty water was flowing into the cave. Wearily but happily arrived back in the heavy shower to the Létrási house.