In the memory of Kincses Jutka: hike through cave Béke in a swim-suit. (Aggtelek wellness weekend II.) – VIDEO

VIDEO at the end of the article!

The “warming up” at previous night in Tengerszem-lake

Jakucs László’s  book, the „Szerelmetes Barlangjaim” (My Beloved Caves) contains a story which tells that during the researchment of cave Béke, one time 3 of them (Kincses Jutka, Grafné Lenke, and „Mutyus”) had gone to a hike only dressed in a swim-suit.

The cave is a typical cave with an active creek, at many points the water level  is higher, so many cavers do not even visit the inner parts or goes only thick neoprene suits. Water temperature at the time of our hike should have been around 7-8°C, according to local researchers’ experiences.

The mentioned part in the book

The three people in the story did it in 1952. But why in only a swimsuit? Probably the answer is „Why not?”

This is a real challenge, and if we would like to know if it is possible, or not, then the only way to go is: challenge accepted! The story tells that they were hiking down there for about 24 hours (well this is a bit unbeliveable) and got further than any other cavers that time (this is possible).

We named the hike after Jutka Kincses, because she was the origiator in the story. 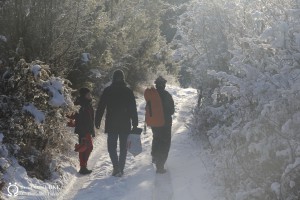 On the way towards the entrance

I personally (György) was planning this since 2013 but it was really hard to get some teammates, and to get in the cave, because it was closed due to high carbon-dioxide levels.

Finally Csilla, Iván, and Farkas came to make this plan a remarkable event. 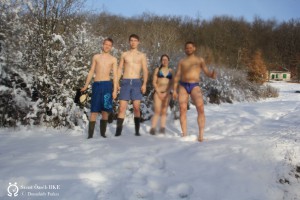 A quick selfie before the start. (From left to the righ: Farkas, Iván, Csilla, and I)

At first, we tested ourselves in cave Kossuth which finally seemed relatively easy. Of course, we’ve carried a bag on both hikes, which was filled with dry clothes and everything else needed if things start to get too cold…

17.th of january, 2016. Beautiful sunny winter morning, and we are on our way to the entrance. Unusually we didnt dress up, only stripped off before getting in… A final photo, and we were on our way. Surprisingly the team managed to go relatively fast compared to normal hikes, and because of continously moving (even when changing the batteries in our lamps) we did not feel cold, moreover I personally felt so hot at the end, that i’ve put my arm into the water to see if it starts boiling…

We had almost ran at the easier sections, until reaching the end of our hike. Unfortunately, the very end of the cave was unreachable, because the water level was not low enough to let us get through a point, which was fully underwater. This is a bit sad, because it would have been a really great thing to make probably the coolest photo ever there lying in the leftover deck chairs at the endpoint. (That room used to be part of a sanatorium somedays.) 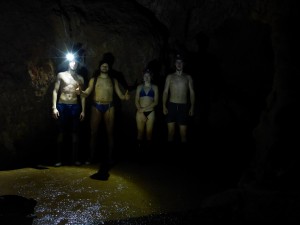 The team at the finish line

The way back was also trouble free, and after 3 and a half hours of fast caving, we got back to the surface. Ivan’s limb was a bit stupored, but nothing else…  I personally had a little muscle strain which passed away until next day, but the gladness what I’ve felt is still present.

Probably, next year we are going to repeat this hike, of course, whith paying attention again to safety. So, if anyone is interested to come, feel  free to join!