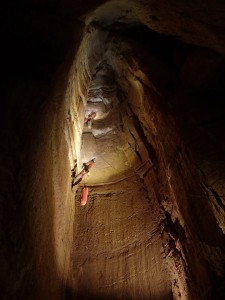 Close to the Italian-Slovenian-Austrian border is the 2000m high mount Canin, where the Michele Gortani cave’s entrance is located. The cave itself (or cavesystem, because it has passageways leading into other caves) has currently 42Km total known length, mostly discovered by hungarian cavers.  During the last expedition in february, a remarkable new part has been revealed by getting through the debris at the end of „Csőgörény” section. Unfortunetaly, the researchers were able „only” to run through about 600m of the new part, due to lack of enough equipment and time. The newly discovered section was named „Quimby”.

Italian cavers started to research the cave in 1965, and from the 1990’s, hungarian cavers continued their work.

The Gortani system –as usually other caves found in high mountains do- typically has huge, hundreds of metres deep vertical shafts.

Website of the cave in the italian registry, with a map at the bottom of the site:  http://www.catastogrotte.fvg.it/1487-Abisso_Michele_Gortani