Getting into the obturated sinkhole at Diós-patak

The previous map of the cave. Source: termeszetvedelem.hu

At the 30th, in august, 2015, after only two days of hard work, we got into the sinkhole-cave of Diós-patak, near Répáshuta (Bükk andes). The cave has been researched decades earlier (by Diogenész team), but the entrance has crashed in, making impossible to get into. The documentation didnt help much, and also the previous map of the cave does not really seem to match the present state, but we think it is the cave which is known as the NO.2 sinkhole of Diós-patak. 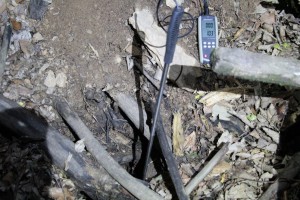 The cave was discovered in the 60’s then was researched in the 70’s by the Diogenész team including other caves at its neighbourhood. At that time, András Thieme was their leader, but nowodays only Ferenc Csepreghy is still actively caving. Till then all of the entrances had crashed in, so if anybody tried to visit the cave, was only able to see buried holes, and smaller, inactive fossile caves until now.

While paricipating a research-manager course in 2013, Zsolt Polacsek drawed attention to the Diós-patak sinkhole, which he tought to be exciting to explore. We were searching for caves for researching, so in 2014 we checked ot the area, and found a previous sinkhole, which is only active on floods, and we felt a strong wind blowing out of it. The wind’s temperature was 10.3°C. Because the wind comes out of there in warm outer conditions, it should be a lower entrance, wich means that it is possible, that it’s part of a labyrinth-like system which reaches even above the present entrance. In addition: only 1Km away there’s the Pénz-pataki sinkhole-cave, which has a 155m vertical size.

So, on the summer of 2014 we saw the area, felt the draft coming out of it, so we decided to re-open the entrance. We finally got the permissions, and asked Miklós Dolgos to be the research-manager, who accepted the request. Officially, everything was ready to start the job… 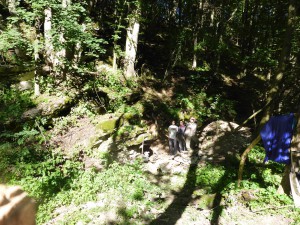 At 28th august, 2015, we stood in front of the buried cave. After a measurement, we knew that the draft coming out had a temperature of 11,8°C, which was quite a disappointing result; it means that the area where the draft cames from, is small enough to warm up a bit during the summer. But we’ve still been excited to get it opened anyway.

After 2 days of hard work through benches, stones, and everything else, what filled up the entrance in the past decays, we successfully got in. 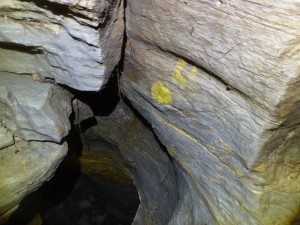 A painted polygon-point. A mark that proves that the cave was discovered earlier. 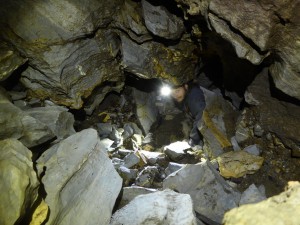 These stones are washed clean. It clearly shows us that the water runoff is usually big

The first thing what appeared in the passable part, was a big, yellow spot, with an unrecognizable sign (maybe a number?) near it. This is a polygon-spot, which was used to make a map of the cave. We are in a flat room, which leads down into the top of a tall passageway. Going down the passageway is the yet discovered cave, with the deep end-point and some short, other parts. Signs show, that someone was there, for example there were a rope, left in a tight hole leading upwards, but all possible ways had leaded to an ending shortly. From some of the holes, weak draft was coming, but that is surely not that draft which can be felt at the entrance.
Because of that, we don’t pay much attention to these sessions, instead we manage to check the other end of the main passageway. Strangely, it starts to descend, and it can clearly seen, that these rocks are washed clean by water. So, this part is also still active in the case of bigger floods, and seems to continue. And the most important: draft is definitely coming from here, much stronger than from the other parts.
So here is the possible answer: the draft which can be felt at the entrance, is coming from various parts of this labyrinth, and the various temperatures together are much warmer than the real draft which we are searcing for, and what is coming from the (hopefully) deeper parts.
Sadly we havent done a temperature-measurement here, in the new part, so this will be a task for next time. 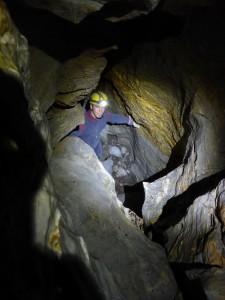 Looking down to the main passageway