Caving in a World War II bunker with the survivors

One day an elderly man contacted me with a strange request: he told me that as a child he survived WW II in a bunker built in the entry section of the Mátyás-hegyi cave (at that time it was called Futura-cave), and he wanted me to help him get down to the cave bunker with a few other survivors. 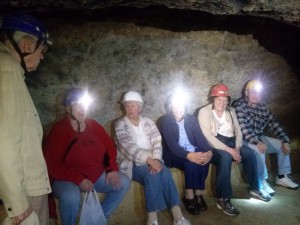 A csapat a padon

We took the job gladly, after we cleared that it is impossible to get inside the former bunker, because now the place is used by the Eötvös Loránd University as a part of their Gravimetric Network, and it is sealed from both sides. For this reasons, all we could do was enter the cave through it’s new entrance, and walk towards the bunker, which is sealed off with steel bars. For the survivors who were children 60 years ago, it was a challenge too.

We found this trip as interesting as our guests, or even more. We heard things, that are hard to imagine these days. That is why we organized this trip, we tried to collect as many info as possible, we think that the story of a cave is as important as its geometrical surveying, and worth recording.

Magyar Ákos who summoned the group told us that back then 300 people lived in the bunker, which was originally built as a storage for grain by a tradesman named Futura. The bunker was equipped diesel generator, but ventilation was not implemented, so they had to cook on gas cookers in the entrance where sometimes they were hit by shrapnels. Their meal was mainly cabbage, occasionally with horse meat from fallen horses.

As a caver we noticed nothing about this in the cave, the only thing we saw in the Tűzoltó (Fireman) branch, that the cave was built up for some reason. 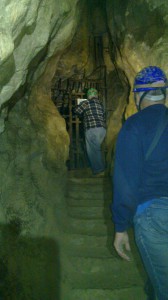