The cave of Törökvész street leads into the Ferenchegyi cave

On the 28th of June during the building of a sewer a new cave was found by the workers on Törökvész street (Budapest).  According to Adamkó Péter they felt draught from the underlay. The new cave is located 20 meters from the place where the Ferenchegyi cave was found in 1933.

As usual, a hurried work started for finding out where the new cave leads, because the half of the roadway couldn’t have been closed forever. Weeks later they mentioned, that they need more labour force, so we (the Szent Özséb Cave Explorer Association) latched on the work.

The task was obvious: we had to unblock a tunnel at the bottom of the chamber with a ceiling covered by pizolites and which was filled out with clay.

As the tunnel became longer and the draught became stronger it agitated several cave explorers’ imagination. One of the specialists measured the temperature, and announced, that the draught isn’t from the Ferenchegyi cave, because it is warmer than the expected. Of course it was warmer, but not because of a new cave system, but because the bodies of the workers, the lamps, and the engines had heated it.

However we hoped, that we can find new sections between the new cave and the Ferenchegyi cave (and in such a maze-like thermal water cave it could have happened).

Some weeks later we got into a tunnel with pizolites on its walls which wasn’t blocked. The first thing which we saw, was a big green cross on the wall: it may have been a fix point of an older map of the cave. But to make ourselves sure of it, we celebrated our success (which was a failure in a certain point of view) with a tour between the entrances of the cave.

The result of the exploration wasn’t announced until the end of August to keep the laymen away (and to prevent the accidents). However, a concrete slab has been built on the entrance of the cave, so now it can be approached from the Ferenchegyi cave. 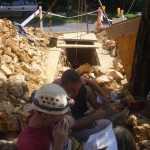 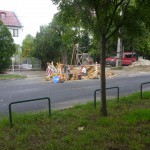 The entrance of the cave 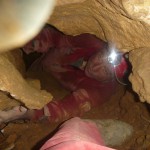 Dr Leél-ŐssySzabolcs between the two caves 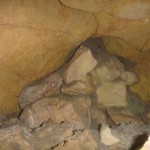 An artificially blocked entrance of the Ferenchegyi cave 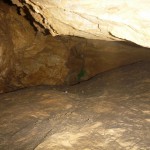