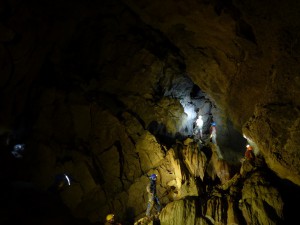 According to Gábor Göckler leader of the explorers (Karst Researcher Group of Mecsek) on 19th of June they found more than 100 metres long new parts in Cave Spiral nearby the Bell-shaft, southward from The Spiralheart.

2 vertical shaft and a crevice with considerable parameters were found.Explorers hopes these parts will continues, they turned back because of tiredness.