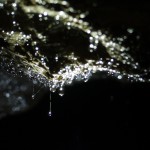 The Legény- and Leány- caves, which can be found in the steep western side of the Pilis-mountain (Csévi-rocks) , were known by prehistoric people. Despite the fact, that a description and a map had been made in 1910, and an excavation had been organized in the course of which several medieval and prehistoric artifacts had been found, furthermore new parts had been explored in Legény-cave in the ’50s, the systematic exploration were began just in 1991 by the Ariadne association.

In the ’90s the connection betwen the two caves was found, the length of the whole system became 3.5 km.

From 2004 the Szent Özséb assotiation has been latched on to the exploration. It resulted in numerous explorations. The most significant archievement was the exploration of Vacska-cave in 2008, which has grown 6 km, transcended the 200 m vertical latitude, and annexed the Rejtekút-, Leány-, Legény- and Ariadne-caves. Now the length of the cave system is 14 km.

The most remarkable characteristics of the cave are the strong draught, the dripstones (the tallest stalagmites are 4 m tall), tha various calcite deposits from thermal water and the apatite fall-out rom the urine of bats. 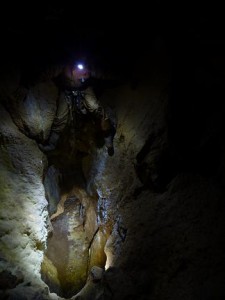 Since 2013 the exploration has been abolished, because the Ariadne association stopped it on the behalf of the construction works, and they citatrized and filled in all of the entrances.