The new section discovered in 2012 (photo by György Slíz) 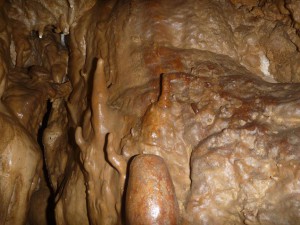 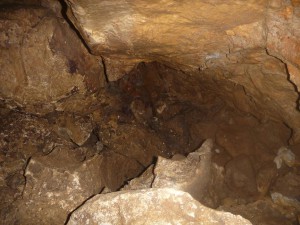 The deep endpoint (where draft came from) before the tightening. It is obvious that bats are using this way. (Photo by György Slíz)

At the east side of Pilis, formed in dachstein limestone, and containing only one small room, the cave was never enclosed, but noone cared about it, although its other name, the „Szelelő-lyuk” (Windy hole) gives an idea about some possibilities.

András Kocsis leader of the Anubis Speleological Society noticed, that strong draft can be felt at the entrance, as an upper entrance: blowing air out in winter and sucking it in at summer. Following the draft at the end of the cave, an unpassable, tight shaft was discovered, and it took a long time to make their way through it, and finally, at the spring of 2012, after 15m of tight section, they successfully got into a widening shaft, and at the shaft’s bottom, a 10m long and 3m wide passageway opened. This passageway’s both ends were enclosed by debris, where draft came from, and bats seemed to be using it for a long while for sleeping at winter. Researchment is still going nowodays.

The problem is, that the tight, long and not straight entrance pit doesnt make it possible to get the debris to the surface.