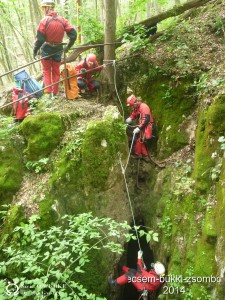 The imposing erntrance of the cave. You should be careful, even an UAZ can fall into there…

With hundreds of other, pit-caves, it is located on Alsóhegy, which is part of the Gömör-Tornai-karst. The entrance can be found on Szilasi-plateau, Northwest from Vecsembükk-pike, not far from village Bódvaszilas. At a time it used to be Hungary’s deepest known cave, but today its total depth is “only” enough for the 3rd place on the list.
The cave itself has likely formed because of the primary dissolving capability of the trickling water, in this case, mainly in widgenstein limestone.
In this region some of the country’s caves can be found, so the area has always attracted the attention of researchers.
Viktor Jordán was the first, who tried to explore the cave, but he only could get to 35m, because lack of needed equipments. The next expedition, to Ottokár Kadic’s proposal, was in 1927, with Hubert Kessler’s leadership. They got down to -91m succesfully, after the debris at the deep endpoint crashed in under one of the members at -70m.

Then, in 1969, the researchments continued, by the management of István Szenthe. They got down into a beautiful, dripstone covered room’s bottom, with successfully reaching a depth of -178m.
In the next year, five speleological organizations worked together for further researchments (Vörös Meteor, EGYT, FTSK, VITUKI, Ganz Mávag), and reached the endpoint at today, filled with detrimus and red clay. They thought the total dept to be about 280m. 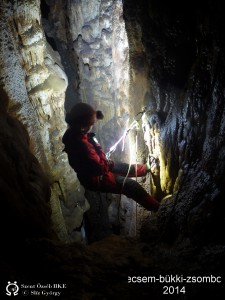 Stalactites in a pit

In1971, István Szenthe organized a research-camp with the previous participants, and tried to make their way through the detris in the endpoint, by the conception of Hubert Kessler.
This time, the cave didn’t get deeper, but some new sections had been discovered. (example: Rom-pit)

In 1988, the Barlangtani department commissioned Márton Juhász, with the detailed mapping of the cave. This map has never been completed, instead, BEAC’s research made a map in 1992, which is in use for today.

Also, in 1988 unknown pits and chimneys discoveries were started, but an interesting fact came to light: the pit starting from Új-rész has been already discovered by the team leaded by István Szenthe in 1971. The prove was one word written there with a pencil: Mikulás (Santa Claus).
The cave is not closed with a door, but rope-technique equipments, and skills are needed, and also, the National Park of Aggtelek’s permission. At winter, visiting is forbidden, in order to protect bats. 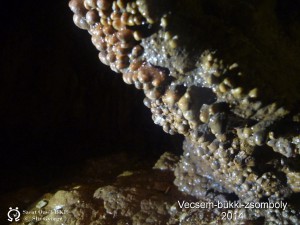 There’s also a plenty of pisolite, which may need explanation.

One Response to Vecsembükki cave