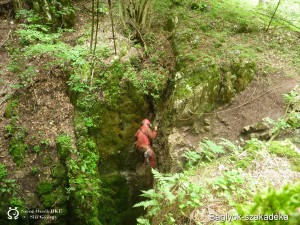 Over the village of Bódvaszilas, close to the blue stripe tourist route is the entrance of the cave, which attracted alsóhegyi-expedition team’s attention in 1911, but at that time, they couldn’t get down, because lack of the appropriate equipments.

Only 16 years later, in1927 was the first successful expedition to research the cave, by BETE team (including Kessler Hubert). They reached a depth of 63m at the time. In 1978, Lukács László (Drúz) noticed the “window” at -30m, through which he could get down to the bottom of Sáros-pit, at -120m. In 1985, the BEAC speleology team continued researching the cave, first by climbing up in the chimneys, then started splitting the scree at the endpoint. In 1992, they reached -151m, but since that the wood they used for stabilizing that section has rotted, and then the section has fallen in.

The cave has possibly been created by the dissolving effect of the water leaking down the walls, but today most parts are in decaying state; beautiful stalactites has started to grow.

The map of the cave can be seen here. 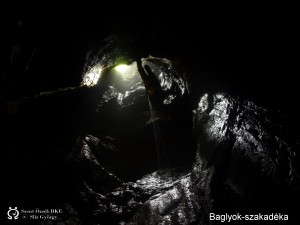 The entrance pit, as seen from the”window”

For visiting this cave, rope-technique equipments and knowledge is needed, and also a permission from Aggteleki National Park’s directorate. In the behalf of bats, between oct. 15 and march 15 the cave couldn’t be visited. Valid researching permission is given out nowodays, but no active exploration is known. 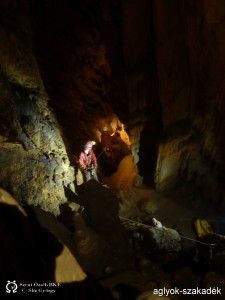 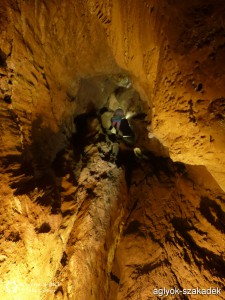