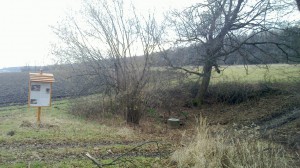 The Kab-mountain, has a unique, basalt-covered karstic structure. At the end of the Pliocene the basalt flowed over the onetime trophic karst, then flattened it. Therefore, a fly agaric-like structure formed, where the white dots are the original, carstic rocks. This is optimal for sinkholes to be formed, because the watertight basalt layer collects the water, which only can escape through the carstic “dots”.
Some says, that under the Kab-mountain there should be a large cavesystem, which leads from sinkholes of Zsófiapuszta to the springs of Öcs and Pula.
The Bakonyi Barlangkutató Egyesületek Szövetsége had done an impressive researchment in the area over a decay, which unfortunately haven’t revealed the waited results. 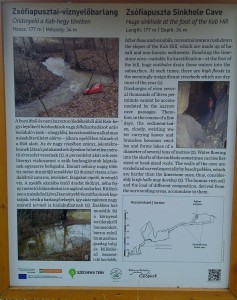 Information near the entrance

The sometime 177m long and 33m sinkhole of Zsófiapuszta should be the country’s most repeatedly excavated cave.
At first, they started to dig out the the Zs-2 (Zsófiapuszta-2) old sinkhole, and found a few metres deep, passable gap amongst the stones, but the endpoind was said to be dangerous, so instead of continuing in this section, they dug out the Zs-1, periodically active sinkhole, and at the bottom, it continued horizontally, and they found tough filling, which was a hard work to get through…
But after 20m, they got exactly to the bottom of Zs-2 sinkhole…
…which has crashed in since they left it. So, they dug out Zs-2 again, and continued working in Zs-2. After digging 15m more, in early 2001, they got into the easily passable cavesystem.

A spacious, 2-3m wide, and 6m high passageway appeared in front of their eyes, but unfortunately it was only 20m long. At the new endpoint, after some hard work, they gave up. The leadership of the researchment didnt realize, that it is probably a siphon-passage, and instead of following the ceiling, they tried to dig down, hopeless…
And then they dug out Zs-1 again, to find another way. They found another sinking point there, but because of the slow, delayed researching, Zs-1 crashed in again, and since then, water filled it up with alluvium…