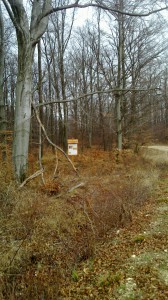 The bigger entrance, and a table with some information near it

The Kab-mountain, has a unique, basalt-covered karstic structure. At the end of the Pliocene the basalt flowed over the onetime trophic karst, then flattened it. Therefore, a fly agaric-like structure formed, where the white dots are the original, carstic rocks. This is optimal for sinkholes to be formed, because the watertight basalt layer collects the water, which only can escape through the carstic “dots”.
Some says, that under the Kab-mountain there should be a large cavesystem, which leads from sinkholes of Zsófiapuszta to the springs of Öcs and Pula.
The Bakonyi Barlangkutató Egyesületek Szövetsége had done an impressive researchment in the area over a decay, which unfortunately haven’t revealed the waited results.

The Baglyas-sinkhole cave opens on the Kab-hill, in a limestone formation, as two separate sinkholes, because the road -wich was built decays ago- diverted a part of the incoming water, and as a result, a new, smaller hole started to form.

Tough many arguements suggested to start excavating the bigger, older hole (for example the fact, that László Markó’s team had successfully got into the cave in 1960-1961), the researchment focused the new sinkhole first. However, this one was opened once too, in the 1980’s, revealing a small room, and a debris-filled endpoint. This small room has been reached again by Kardos László (Maris) with an excavator, but behind the debris, only a tight, unpassable section was found, and the Bakonyi Szövetség tried to make it passable with hard work, but they only made it some metres further… 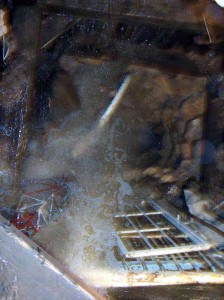 Next year (2004) Maris (Kardos László) had a strange idea: let’s „recruit” some people at the festival (Művészetek Völgye) in the neighbourhood to help with the work. Maris is well known by his strange ideas, but surprisingly, he had luck that time.

Some dozens of people came, and the work kept going in an accelerated mode… Until the end of the festival, they successfully got into the cave, discovering the outer sections. After this discovery, some arguement started between Maris and the Bakonyi Barlangkutató Szövetség (Speleological Society of Bakony) to decide who is authorised to be the researcher, until the arguement was solved: now noone is researching the cave…

The cave is relatively spacious compared to the local ones. It contains only a few carstic sections, because it was mainly evolved when a passageway somewhere lower crashed in, so in the currently discovered parts there are a lots of debris, rocks around, and some parts have been fixed with concrete due to danger of collapse. The main passageway is heading downwards, and there are the only known stalagmites of the Kab-mountain. The endpoint is filled with debris, which probably could hide some new parts behind it.

Rocks, what fell off when the unknown, old lower passageway crashed in. Photo: Schafer István

The cave is enclosed, to visit it, a permission from Balaton-felvidéki National Park directory is needed.